The wolf and the lamb shall feed together, and the leopard shall lie down with the kid.

We are entering a new age in consciousness. Many expected drastic change to take place after 2012, the end of the world or a translation of bodies into light. The truth is that 2012 functioned as a portal; a portal through which new forms and dimensions of consciousness and perception can take place. 2012 did not demarcate immediate change, but rather a gateway through which a new potential could emerge. People will be capable of new dimensions of experience, ones that tap into the spirit world behind the aether. This is the one through which Collective Consciousness is guided. Collective Consciousness is as we speak being greatly changed. It has been happening for the past five years.

If you are a beginner, this all probably sounds like gobbledygook. The circle of initiates are aware, and they are resigned to this information becoming public knowledge. That being said, let’s look at the shape of consciousness which science currently evades.

Our reality is only one layer of what is real. The material world IS real, but only on a certain layer of perception. The eyes translate electrical signals into shapes, colors, and forms which the brain recognizes and assigns meaning to. Yes, this world is real, but what does it look like without the brain and the eyes and what does it sounds like without your ears? The truth is there are many other layers to reality and they are not contained in distant galaxies. You will need the spiritual eye to see them.

For now, you could conceive this as a spiritual aether, a fuzzy dense cloud of potentiality which is generative and stormy. It influences all of us, it resonates from the stars and from beneath the earth and permeates the hologram of our awareness.

Consciousness has a geometry.

It is found not only in the human experience, but also in animal,  vegetable, and planetary forms. These forms have different properties, and they intersect at different harmonies. Humans are the crown of creation because we have the capacity – and note not the inherent capability – to experience all forms of consciousness, including the divine.

They also say that within us, all the secrets of the universe are written. You could even say that our bodies resemble the temple of Solomon, but only when ‘worked’ upon by the scepter of craft… 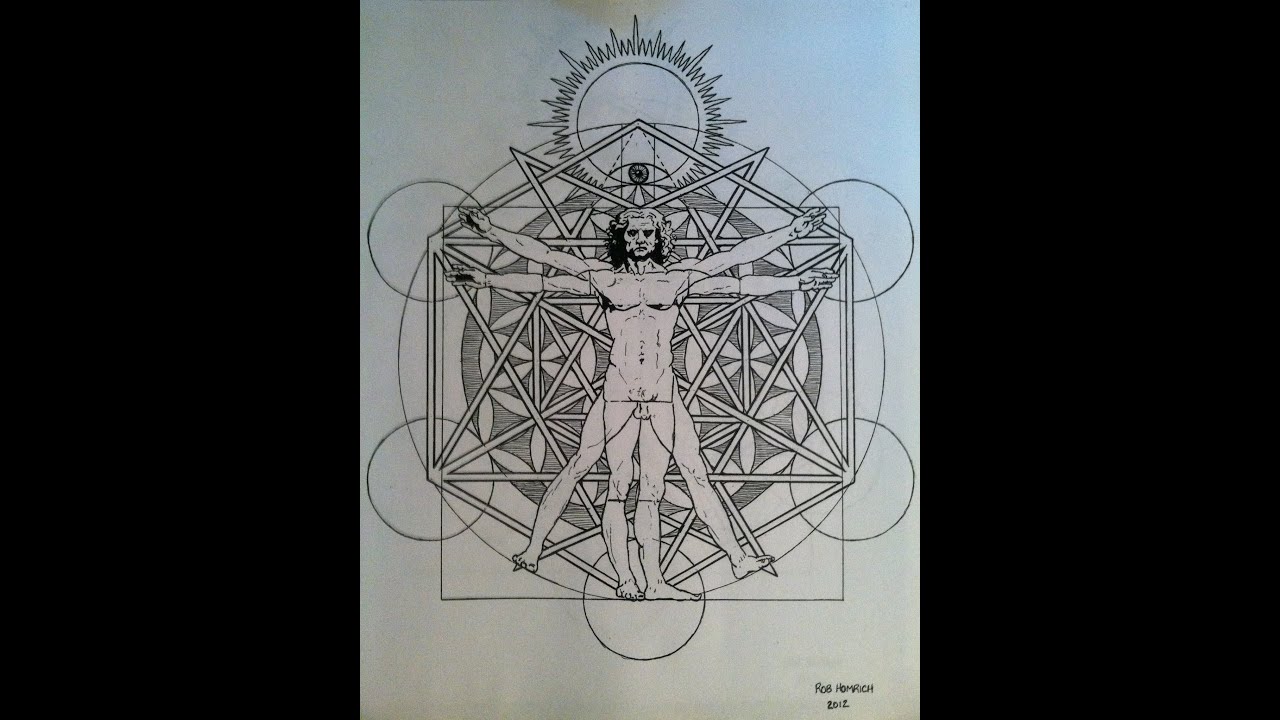 The temple of the man is written on the stars, the stars are written upon man. Take a look at the pictures above. The Vitruvian man on the right has a merkabah behind him. The merkabah appears as metatron’s cube, the shape behind the man with six points. That merkabah is something that everybody can learn to awaken. The merkabah allows for many spiritual capabilities when it is awakened. When it awakens, it shines like fire. It allows astral travel, teleportation. Enoch who walked with God obtaining a living Merkabah. As you can also see all the patterns of sacred Geometry and life are written behind the man. The flower of life, for instance. The flower of life is the pattern of creation.

What guides the pattern? The pattern itself is the guide. If you picture space, you probably picture it very ‘spaced’ out and distant from point to point. After all, it is constantly expanding, getting bigger and bigger and farther away from itself. But is space truly distant as it seems, or is that just a trick of the brain? Let’s say that the brain and the mind are not the same thing. There is consciousness in the mind. The brain is the vessel within which this consciousness sits and is held. When your brain dies, the consciousness goes back to the place behind space. Where is this place? The Buddhist might tell you, “It is everywhere and nowhere“.

You can’t ever get away from the place behind space. Imagine a huge array of tentacles, splaying out in every direction. On the arms of this network there are spheres. Spheres represent individual experiences in spacetime. When the brain goes dark, the consciousness travels back along the arms of the network towards the center. The center is what some may call the cosmic mind. It is always vibrating. It sings. That is why the word of creation is the key of the aeon. This is the freemason’s “lost word”. What is being vibrated by this singing. The pattern! The pattern is being woven into the place behind space from which all consciousness flows from its origin point. It spirals outward. This is the Golden Mean:

Experience is shaped by two pillars, forces of duality that weave a helix. In their center, a hologram is shaped by the interference of these opposed forces.

To understand the picture above, you have to visualize it in three dimensions instead of two. You must imagine yourself as the point. Subtle vibrations in the swirl of the pattern, created by the word, will change the hologram of experience created at the center. But you must also understand, that you are neither the purple dot in the middle of the picture nor the helix guiding its formation. You are both.

Earlier, I said you would need the spiritual eye to perceive these truths for yourself. So where is that eye? It was once outside the head like a lantern. Now it’s trapped in your skull. That is because human consciousness has changed greatly since its beginnings. Proceeding from vegetable consciousness like deep slumber, to animal consciousness like a waking dream, to our current human consciousness. At first humans slipped in and out from behind the veil like dipping their limbs in an ever-present pool of water. Otherworldly creatures were purely evident, but individual reality was loose and there were few places to create an interior mental space for thinking. The development of thinking changed human consciousness. The pineal gland became trapped behind the skull, as did our interior worlds. We were now cut off from one another, but we were also capable now of greater imaginary and creative acts.

Where is the pineal gland? The picture above contains a few symbols that the aspiring initiate should become aware of. There are many layers, but I will describe the pertinent one. The different colors represent the Chakras. The line represents the spine. The Kundalini are the two forces rising up the spine. See how they are a helix? And how the weave in counteracting positions? The head of the two snakes converge around the pineal gland. It is shown with wings because it is the center to ascension, the third eye where the portal to other worlds can be opened. The trick of creating a living merkabah lies in the activation of the chakra. Now take another look at that picture. What is that lovely purple flower above the pineal gland? Well that is the crown. The crown has the pattern of creation pulsing out of it. Man is the crown of creation, and he partakes in creation. That is why the lost “word” is so valuable. The pineal gland is also a representation of the grail and the ‘holy wedding’ or ‘chymical wedding’ of alchemy. As you can see, there is a male and female generative force here. The “lovers” exist both in the external world between the magnetism of two harmonic souls, and in the internal world – as the marriage of the self, the illumination of the soul – the birth of ‘shining’, the ancient priesthood of concealed wisdom, and the true illuminati. Not only does this happen in the process of awakening a secret chief or occult master, but this chymical wedding occurs – like all great truths, on many layers – both in a macrocosm and a microcosm. Within the soul, within two souls, within the soul of the earth itself, and even within the soul of the sun and moon.

The new aeon will seek and solidify the lost word. The current occult masters are aware of a great shift in the flows of energetic currents. These flow from all celestial bodies to the earth, and from the earth – and the crown of its inhabitants – back into the gravity of the planets and the center mediator, the great judge : the sun.

Movies like “Transcendence” and “Lucy” all point to new stages in human evolution, which are occurring, not in materiality, but in consciousness. The reason so many shows and movies feature this theme is because it is being born like an egg from the zeitgeist.

You will be part of it. You already are.

5 thoughts on “As The Wheel Turns”